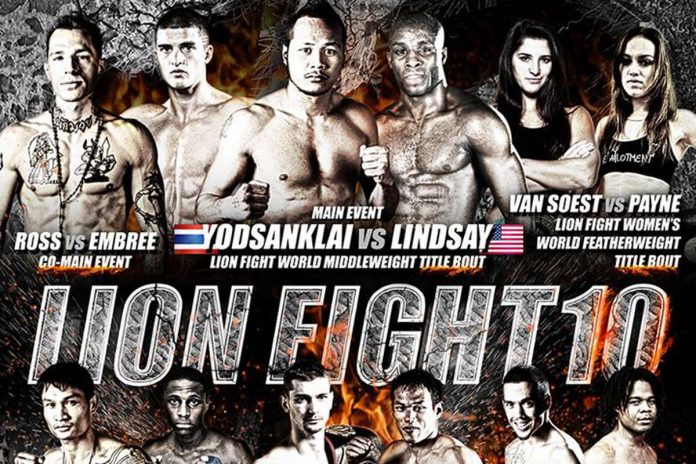 So, I’m well aware that Lion Fight 10 went down last night, but where was the live coverage? Albuquerque has been in the middle of monsoon season, which means crazy storms, tons of lightning, flash flooding and everything else in the book outside of biblical plagues. For some reason my satellite never went down last night, but my internet was spotty at best, so here are the Lion Fight 10 results kind of late, but better than never.

The main event saw Yodsanklai batter and bruise Chike Lindsay, who had a good first round but then felt the full power of Yodsanklai and was unable to do much. The co-main event saw Matt Embree and Kevin Ross square off in a decision that is hotly-contested, but if you watch the fight closely, Embree was indeed the winner. Ross was applying a lot of pressure throughout the fight, but Embree was landing the cleaner strikes and counters. Ross rallied near the end, but it wasn’t enough in the judges eyes to give him the W.

Tiffany Van Soest lived up to her hype in capturing the Lion Fight Women’s Featherweight Championship against a tough Lucy Payne via a first round stoppage. A few well placed punches followed up by some brutal elbows was all that the ref needed to see before he stepped in to call the fight. Sean Kearney came in on late notice against a man he knows very well in Malaipet Sasiprapa and once again Malaipet was able to get the better of him, just working him over the whole fight with his kicks and clinchwork.

Ognjen Topic and Coke Chunhawat put on what was arguably the most entertaining fight of the night, as Ognjen was strong earlier on in the fight, but Coke was able to surge later in the fight thanks to the local fans cheering him on. It was a classic battle of Ognjen being stronger from the outside and Coke feeling more comfortable in close with the clinch. The opening fight saw two less experienced fighters in Jason Andrada and JP Cole square off in what was a good scrap and saw Andrada take the W.