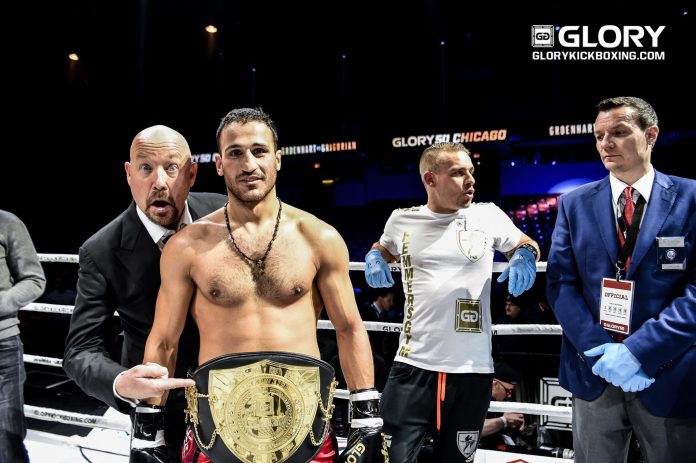 Heavyweight Title Headline Bout:
Rico Verhoeven (R5 – Dec) Guto Inocente – The first two rounds saw Guto try, but really not gain much traction against the champion. He’s tried to land some spinning backfists to no avail, while eating low kicks from Rico. Each low kick opens his chin up and he’s getting caught every time. Round three was more of the same, really. The best moment of the fight for Guto was an illegal sweep on Verhoeven, which just made Verhoeven mad, but not enough to knock him out. Guto was able to last, but clearly lost the fight.

Featherweight Title Co-Headline Bout:
Petchpanomrung Kiatmookao (R5 – Dec) Robin van Roosmalen – Robin missed weight here, with all reports being that his weight cut was rough on him. Nobody has mentioned it on-air, although we had confirmation that he did miss weight and will be a lightweight from now on. Petch was more aggressive, controlled the ring and was the one who clearly won this fight.

Heavyweight Bout:
Jamal Ben Saddik (R1 – TKO) D’Angelo Marshall – Ben Saddik was in the best shape of his career and looked laser-sharp. He was slipping his straight when Marshall went for kicks, which led to a finisher where Ben Saddik caught a left kick and landed a right straight followed by a left hook for the second knockdown. The third came with a parried strike, with the left hand putting Marshall down for the third time to end the fight.

Welterweight Headline Bout:
Murthel Groenhart (R2 – TKO) Mohammed Jaraya – Crazy fight. Jaraya definitely has a Badr vibe, not in his charisma or anything, just in that there’s a sense of “what the hell is gonna happen” in his fights. Paul Nichols called a pretty bad down in R1 and Jaraya looked like he was gonna attack him, but held back. He was showing a lot of aggression throughout, which was making Murthel change his game plan to use his reach more. In the second round Murthel just unloaded on him, dropping him once, then beating the piss out of him on his feet until the ref stepped in.