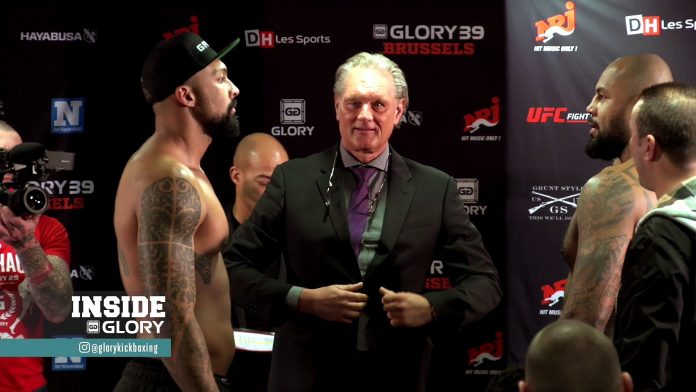 GLORY 2 Brussels is quickly approaching, as it takes place this Saturday, October 6 in Brussels Belgium with a stacked lineup. Although the fight card remains mostly unchanged, there have been a few changes since the original one was announced and we’ll run you through them, as well as the main fights that haven’t changed.

Remy Bonjasky makes his return after almost three years, taking on Anderson “Braddock” Silva in the main event. Bonjasky was away from the sport due to an eye injury that was thought to be career-ending, in addition to that for quite a while there really was nothing out there in kickboxing to entice him to come back. Although he was out of the ring for almost three years, Bonjasky wasn’t away from kickboxing as he opened his own gym, Bonjasky Academy in the Netherlands and also has been training Danyo Ilunga over in Germany for quite some time now. It’ll be very interesting to see how he does in his return, especially considering that he wasn’t given an easy fight at all against Anderson “Braddock” Silva.

A match-up that’s sure to be competitive is Nieky Holzken vs. Murat Direkci, which takes place at 78kg. Direkci is normally a 70kg fighter but apparently he didn’t want to make that weight anymoe. He announced his retirement back in January but it seems that he’s been drawn back for at least another fight. Nevertheless, in his last fight, Direkci gave Robin van Roosmalen all he could handle and the jump up in weight shouldn’t be that much of a problem as Holzken is also formerly a 70kg fighter, and has a style where Murat can at the very least be competitive.

Filip Verlinden fights Fabiano “Cyclone” Aoki, a Brazillian-Japanese fighter based out of Japan. Verlinden almost beat Danyo Ilunga back in June and if that performance is anything to base off of, he could definitely win this fight. Aoki is similar to Verlinden in that he’s a smaller heavyweight. Speaking of Danyo Ilunga, he fights Ali Cenik at 97kg. Both are similar in weight, with Ilunga having the height advantage. Although Ilunga’s the clear favorite here, it definitely has potential to turn out to be a fun fight if Cenik opens up and throws combinations.

In the fight I’m most looking forward to, Murthel Groenhart takes on Marc de Bonte at 79kg. Murthel usually fights at 70-77kg, while de Bonte is the bigger fighter, normally fighting around this weight. Although Murthel is outsized, his power and offensive bursts can keep him in any fight. de Bonte is still quite young and this will be his first fight on the big stage.

And that’s not even half of the fights. I’ll take you through a few fights that went through changes though. Originally, Mohammed Khamal was set to fight Marat Grigorian at 71kg. Khamal pulled out due to personal reasons and Alex Vogel took his place. Also, Jhonata Diniz was originally scheduled to face Martin Jahn, but is now fighting Cihad Kipenek. Check out the full fight card below and for more info, including how to watch the event, go to gloryworldseries.com.