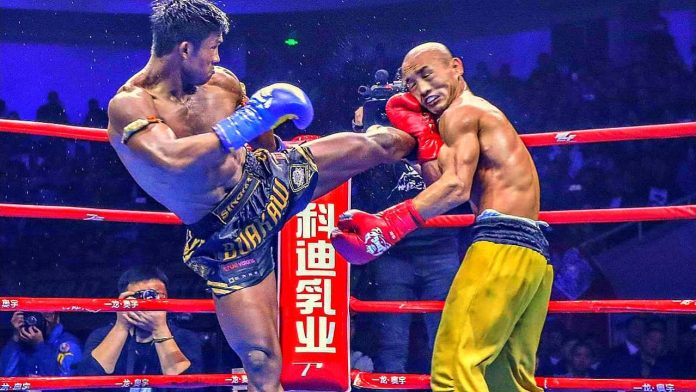 Although there’s almost no buzz at all surrounding Thai Fight tomorrow, the semi finals of their tournaments at 67kg and 70kg take place, with all eight fighters have won their quarter final match-ups a month ago.

The name that sticks out, of course, is Buakaw Por. Pramuk, who faces Nishikawa Tomoyuki in his semi final fight. Buakaw dominated Mauro Serra en route to a third round stoppage last month to qualify, while Tomoyuki got here by defeating Woo Yeong Choi by decision. This fight is pretty much a guaranteed win for Buakaw, let’s be real.

On the other side of the 70kg bracket, Vitaly Gurkov fights Antero Hynynen. A lot of people remember Gurkov from getting completely schooled by Giorgio Petrosyan in K-1 in 2010, but the truth is that he’s much better at Muay Thai than kickboxing and has a very strong clinch game which even gave Kem Sitsongpeenong a lot of trouble when Gurkov defeated him at the IFMAs in September. Hynynen was a relative unknown before defeating Shannon King in his quarter final fight, showing a savvy kicking game and good timing to get a decision win. I think the ideal match-up for the finals would be Buakaw vs. Gurkov.

At 67kg, the match-ups are a lot tighter, with the field being more competitive. Mehdi Zatout faces Singmanee Kaewsamrit on one side of the bracket. Zatout made quick work of Shan Cangelosi in the quarter finals, cutting him with an elbow shortly into the first round while Singmanee dominated Valdrin Vatnikaj to a decision win. This fight should be pretty competitive, especially with the way Singmanee fights and based on his two fights with Houcine Bennoui.

On the other side of the 67kg semi finals, Andrei Kulebin fights Adaylton Pereira de Freitas. Adaylton, like Hynynen was also not very well known before his quarter final fight, where he scored an upset of Houcine Bennoui. Kulebin defeated Bennoui’s teammate, Crice Boussoukou to advance to this fight. This should be another very close and competitive fight, and I could see it going either way.

The event will be shown live on Channel 3 in Thailand at 3:00 PM local time.