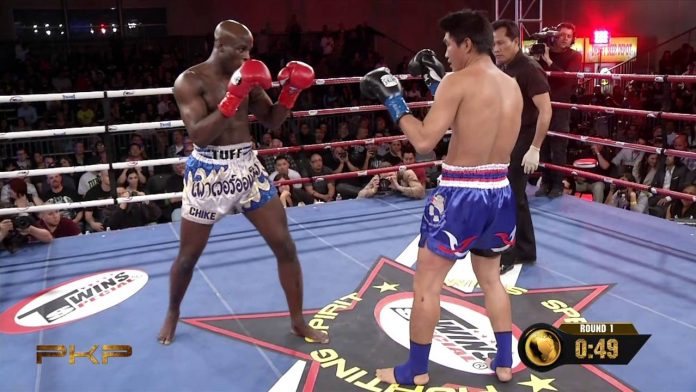 At first glance, Chike Lindsay vs. Saiyok is not the most intriguing fight on the Muay Thai Superfight Show scheduled for May 13 in Thailand. That honor no doubt belongs to former Heavyweight Boxing World Champion Riddick Bowe, who will be making his Muay Thai debut at 45 years old. To be completely honest, unless Bowe found a mystical reserve of secret energy he is probably not going to be any sort of force in the heavyweight kickfighting world. Other oddities include appearances by Dewey Cooper and Marvin Eastman.

Your eye might be drawn to the newly crowned LionFight Light Heavyweight Champion, Simon Marcus, who squares off against Kaoklai Kaennorsing. Kaoklai is probably still an exciting name for fans newly acquainted with Muay Thai, but the truth is he’s been over the hill for quite some time now. Marcus is at the peak of his career and is fresh off a win over one of the greatest 77 kg Muay thai fighters of all time in Artem Levin. Not only that, but Kaoklai has already lost to Marcus in a lopsided decision back in 2012. Outside of a freak injury, I can’t fathom any way Kaoklai could win, or even why this fight was made in the first place.

So now we are arrive at Saiyok vs. Lindsay. This is easily the best match on the card. Chike Lindsay is currently riding a hot-streak of wins, most recently taking out Cyrus Washington at the Yokkao Extreme Qualifiers, followed by a decision win over Somluck at Muay Thai World Stand Off. He’s one of the most talented Americans in the game right now, but he’s facing an incredibly skilled opponent in Saiyok.

Saiyok Pumpanmuang is coming off two wins, the latest being a dominating decision over Thiago Texeira at Thai Fight 2012. Although some wind was taken out of Saiyok’s sails due to a loss (via injury) to Team Nasser K’s Dylan Salvador in October of last year. Saiyok is still one of the best at 70 kg in my opinion, possibly THE best, and putting Chike Lindsay away will be another step towards proving it. This fight will answer a lot fo questions about both Saiyok’s longevity, and Lindsay’s metal at the top of the sport.