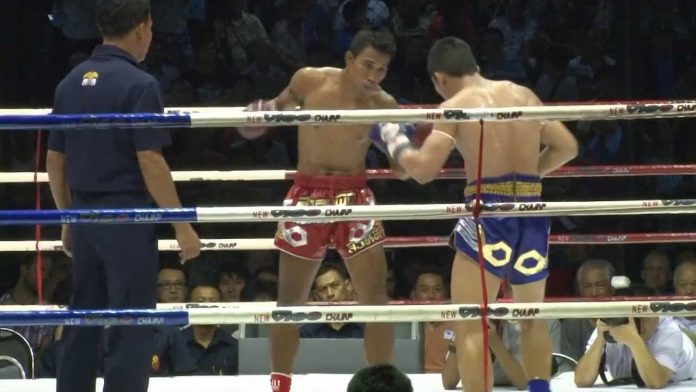 We’re going to start highlighting a selection of fights to watch monthly from now on. This month is a lot like last month where there’s so many good fights that it’s hard to squeeze them all into one article so this will be Part 1, featuring ten fights. Part 2 will come shortly after and will feature ten more fights.

For Part 1 and for the majority of these posts in general, I’ve decided to focus more on fights that people might not know about, as opposed to ones that are on the big shows that most of our readers will be familiar with. Since I’m calling these fights to watch, some have wondered just how to watch them, and well, the answer is pretty much YouTube for most of them.

The rematch with Penek continues to elude Sam-A, who lost to Penek back in May and is seeking to avenge that loss. Sam-A still remains one of the best fighters in the world and is faced with Petpanomrung, who he defeated in March. Petpanomrung is still very young and definitely has a bright future, already hanging with the top fighters, recently defeating Yodkhunpol Sitmonchai in September and losing to Pokaew in October. Sam-A and Petpanomrung are two of the more technical fighters so this fight, although it probably won’t be a barn burner or anything, should be a very intriguing tactical display.

Roman Mailov looks to continue his rise at 70kg, now facing Armin Pumphanmuang, who has made a name for himself this year at Thai Fight. The fight will be under kickboxing rules, so Armin will be at a disadvantage, but Mailov himself comes from Muay Thai, although he’s fought a lot of kickboxing lately and has adapted to the ruleset. Mailov is only 20 and by no means would a loss hurt his career. He’s being steadily built up on W5 shows in Russia, and ventured to Germany two months ago where he defeated Leo Zulic. Armin is by no means a top Thai but should at least provide a test for Mailov.

This is a battle of LiverKick’s #1 and #4 lightweights, holding huge implications in the lightweight division. Ozkul takes the #1 spot if he wins. Ozkul is at a significant size disadvantage in this fight, with it being at 63kg, along with the height advantage that Noiri has over him. Both fighters’ strengths and weaknesses play right into the others’, so the winner will be the one that is able to better assert their strength and take advantage of the opponent’s weakness. Ozkul’s known for his heavy punches, and Noiri’s main flaw happens to be punchers. Ozkul is most susceptible to tall fighters with strong and dynamic knees, something Noiri fits the bill of very well. Noiri has to be favored here, especially being on home turf, but if Ozkul lands with one of his power punches, Noiri will be in trouble.

November is a busy month for Saenchai, and this will be his first fight of the month. It’s not too often that you see two Thais fighting in a foreign country, let alone two top Thais. Pakorn comes off a loss to Mongkolchai Phetsuphapan in October can be a very tactical fighter at times and can go from being a technician to engaging in a fire fight. With Saenchai the latter is almost guaranteed not to happen, and not many can out-technique Saenchai. With Pakorn, it’s unlikely that he’ll win but simply the scenario of the fight and that Pakorn atleast should be competitive make it a very fun fight.

Sahak’s It’s Showtime 85kg world title is on the line here. Pereira comes off two tournament wins in Brazil, with the second one qualifying him for this fight and spot on It’s Showtime. Pereira definitely isn’t the prettiest fighter in terms of technique and style, but I think he has a lot of potential. Whether he can beat Sahak or not, I do think he’ll at least be competitive, especially if he has the conditioning to go five strong rounds. This is a great 85kg fight featuring one of the division’s top fighters, also allowing us to gauge how good Pereira is when fighting against top competition.

Rumble of the Kings is back with their annual November card, and one of the interesting fights on the event is this one. Alex Harris made a name for himself last year when he defeated Yoshihiro Sato, and then made an appearance at GLORY in Stockholm this year, losing to Nieky Holzken despite a valiant effort. Harris is back in Muay Thai rules for this fight and against Madsua, who’s been a tough out for the likes of John Wayne Parr and Jordan Watson, defeating both of them. Harris will need to stay out of the clinch if he wants to win this one, though Madsua can still be a problem outside of the clinch for him as well.

Although he got stopped from low kicks by Yuki a week ago, Hernandez will move on and still fight. Peynaud is another formidable opponent and won’t be an easy opponent at all. This time Javier won’t have to worry about travel or jetlag, being in his hometown. It’s a very interesting match-up as Peynaud doesn’t pose the same problems that Yuki did and his style is one in which it’s unlikely that anyone will dominate this fight.  It should be action packed with Peynaud looking to notch a marquee win and Hernandez looking to get back on track.

This is Saenchai’s second fight of the month, and against the Lumpinee Stadium light welterweight champion. Damien Alamos is coming off a loss to Diesellek Aoodonmuang. Saenchai is smaller than Diesellek but that doesn’t really matter as he’s beaten opponents that are even bigger than Alamos and at or near a similar level to him. This is a fight that a lot of people have wanted to see ever since Damien became Lumpinee champion. Saenchai and the top fighters around 130-135 are just so good that many can beat larger opponents, and that will probably be the case here with Saenchai most likely winning in a fun fight.

Kaopon Lek is a former Lumpinee champion and former Fight of the Year in Thailand, with those accolades coming from the ’90s, amazingly. What else is amazing is that he’s only 35 years old and still going strong no less. He comfortably beat Andrei Kulebin last year, still showcasing what level he’s at after all these years and living in Italy for quite some time. Liam Harrison has had some fights fall through due to injury but returned last month with a stoppage over Angelo Campoli, showcasing the low kicks that destroyed Andrei Kulebin. Harrison is a very dangerous fighter and this along with Kaopon Lek’s ring savvy provides for a very intriguing fight.

This fight pits LiverKick’s #3 and #6 lightweights against each other. They faced off at almost exactly the same time last year on the same event, in the same place, with Bennoui getting a split decision win that many thought Adamandopoulos should’ve gotten. Bennoui hasn’t fought since January, while Adamandopoulos rebounded from the losses to Bennoui and Ozkul with a big KO win over Ryuji Kajiwara and a win last month over Cyril Abbas. This fight is sure to provide some great action, much like the last one and will again be five rounds.