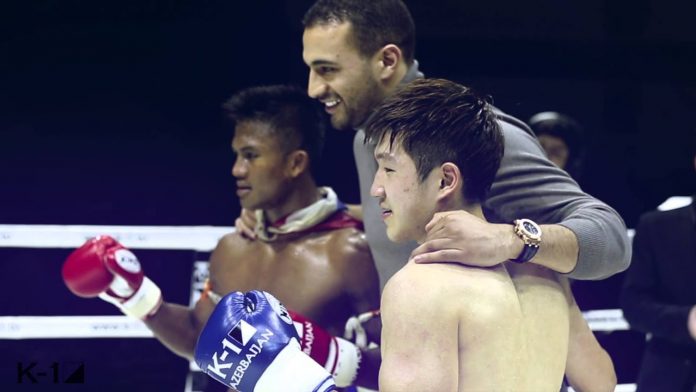 K-1 has announced the match-ups for their MAX Final 8 tournament happening on December 15 in Athens, Greece. The tournament will feature the winners from the First 16 event in Madrid that took place earlier this year, including Liverkick top 10 fighters Artur Kyshenko, Andy Souwer, and Andy Ristie, who entered the Final 8 with wins over Su Hwan Lee, Abraham Roqueni, and Gago Drago, respectively. Mike Zambidis enters the tournaments riding a win over Chahid in what might have been the fight of the year, and a solid performance against Fadi Merza back in April. He’ll certainly have the fans behind him fighting in his home country. Also on the card is former It’s Showtime champion Chris Ngimbi, Murthel Groenhart, Reece McAllister, and Yasuhiro Kido. Most interesting perhaps is the inclusion of both Ristie and Groenhart, who competed on the GLORY 2 Brussels card in October and were presumed to be under contract with the rival organization.

In the first fight of the tournament Mike Zambidis takes on Reece McAllister, followed by Yasuhiro Kido against Murthel Groenhart, Artur Kyshenko vs. Chris Ngimbi, and Andy Souwer vs. Andy Ristie. This is a very interesting field. While Artur Kyshenko is most likely the favorite to win, Mike Zambidis, Chris Ngimbi, Andy Souwer are the clearest opposition. Plus, Andy Ristie has been on fire lately, knocking out most of his opponents in the first few seconds of the first round, so it’s never wise to count him out. Don’t sleep on Groenhart either. He’s an absolutely massive middleweight and packs a ton of punch.