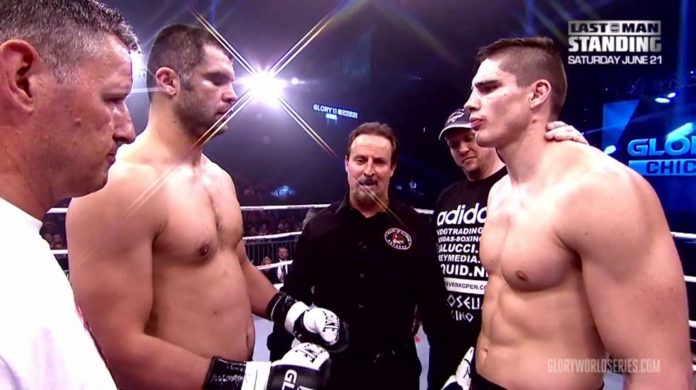 There’s been a lot of speculation lately as to what would happen to Daniel Ghita and Rico Verhoeven, with them being excluded from K-1. Now it’s been announced that they’ve signed with GLORY, adding to their stacked heavyweight roster.

Ghita and Verhoeven are likely to make their debuts for GLORY at the GLORY 4 Tokyo: Grand Slam event on December 2 at the Makuhari Messe in Tokyo, Japan. The event features a one night, 16 man heavyweight tournament with a brand new format.

The 31-year-old Ghita, the last reigning heavyweight champion for It’s Showtime before the league was acquired by GLORY in June, has terrorized the division of big men with his brutal leg kick attacks that have helped earn him an astonishing 77 percent KO rate and the nickname ‘The Savage Samurai.’  The 1.95 meter (6 foot 5), 114 kilogram (251 pound) Ghita, who fights out of the Romanian capital of Bucharest, is widely regarded as the greatest challenge to Semmy Schilt’s world No. 1 heavyweight ranking.

“I decided that GLORY is the best and only logical fit for me because this is where all of the best heavyweights in the world compete,” said Ghita, who had been sought after by several other leagues.  “If you want to be recognized as the best, you have to face and defeat the best and, as a true competitor, I have every intention of distinguishing myself as the No. 1 heavyweight in the world and a GLORY champion.”

“We are very excited to welcome Daniel Ghita to our highly-competitive heavyweight division,” said Marcus Luer, Managing Director of GLORY. “

“With the addition of Daniel, there is effectively not one top tier matchup in kickboxing’s heavyweight division that is not possible.”

While Ghita has been doing damage in the upper echelon of the heavyweight division, the 23-year-old Verhoeven, who fights out of the city of Bergen Op Zoom, has gained recognition as one of the brightest up and coming, new stars in the sport.

“Verhoeven had some superb performances for It’s Showtime and it was clear,very early, that he has massive potential to become a superstar. I look forward to seeing him meet the challenges he will be faced with in the GLORY heavyweight division,” Luer remarked.

The pair are likely to make their respective debuts for the organisation at GLORY 4 Tokyo HEAVYWEIGHT Grand Slam at Makai Messe (former Nippon Convention Center) on December 2. The event will be headlined by a 16-man single-elimination tournament, which will see the winner fight four times in one night on the way to ultimate victory.