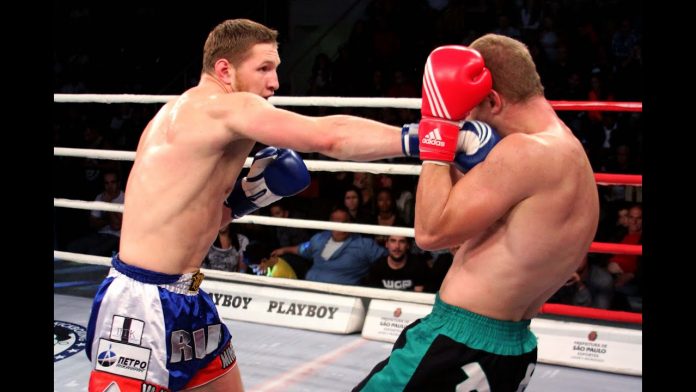 Fight Nights held Battle of Moscow 9 today in Moscow, Russia with three kickboxing bouts on the card. Vladimir Mineev fought the biggest test of his career in the main event against GLORY’s Ali Cenik.

Mineev hadn’t fought since June and it looked like there may have been some ring rust in the first round. By the second round, Mineev was starting to find his groove before getting caught with a perfectly placed coutner left hook from Cenik, sending him to the canvas. Down on the scorecards, Mineev rallied back in the third round and forced an extra round, where he dropped Cenik and got a decision victory. Mineev was tested and passed, but I’ll be the first to say that he didn’t look really good like he normally does. The good thing is that he’s still only 22, and this fight also showed that he should stick to fighting at 95kg and not pursue heavyweight.

At 80kg, one of the top light heavyweights in kickboxing, Alexander Stetsurenko returned to the ring where he faced Golden Glory’s Karapet Karapetyan. On paper this seemed like a sure win for Stetsurenko but Karapetyan showed that he’s really improved over the course of this year and gave Stetsurenko a lot of trouble, not allowing him to get inside and peppering him from the outside. Stetsurenko looked to have hurt Karapetyan a few times when he was able to get inside, and ultimately got a razor thin decision victory. For Karapetyan there’s no shame in defeat and he put up a really good fight.

At 95kg, another staple in Fights Nights, Ramazan Ramazanov, dominated Holland’s Fabian Gondorf over the course of three rounds. Ramazanov was very sharp with his kicking game and might be finding some consistency to his performances. I’d like to see him take a step up in competition against even the likes of Ali Cenik to see how he does.