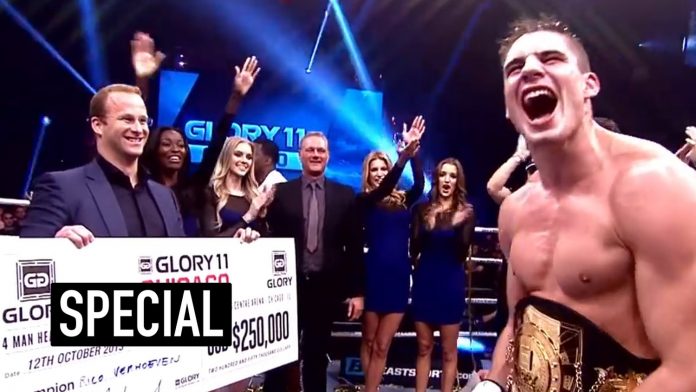 Very rarely does it seem like within the span of a week we get major kickboxing news like this, but when it rains it pours and 2012 seems to be the year where Kickboxing has been given the money and investors it needs to grow and truly be the global force that it is. Earlier in the week, we made an announcement about the Glory World Series in March, an event which will host Semmy Schilt, Mark Miller, Errol Zimmerman, Jerome Le Banner, Robin van Roosmalen and more, and now we can announce that Glory is planning on running three huge tournaments this year.

The tournaments will begin around May and will take place in three different weight classes; 70kg, 85kg and Heavyweight. The addition of 85kg is one to make a lot of fans happy, as K-1 has been known to ignore weight classes in between 70kg and Heavyweight, but there is a ton of talent worldwide between 70kg and 100kg that tend to go unrecognized due to the K-1 format. In 2012 we do not have to worry about this, as Glory will be running these three huge tournaments. On top of that, the prize money involved is $1 million USD all total, with the 70kg and 85kg tournaments receiving $300k each and Heavyweight for $400k.

To put this into perspective, compared to K-1 tournaments it is comprable pay, if not better in the cases of 70kg and 85kg, and a great opportunity for fighters around the world to prove their mettle in a new arena. Bas Boon is quoted in a press release as saying that he is sure that Peter Aerts, Giorgio Petrosyan, Buakaw Por. Pramuk, Jaideep Singh and Ewerton Teixeira will follow suit and sign agreements with TSA to participate in these Glory events.