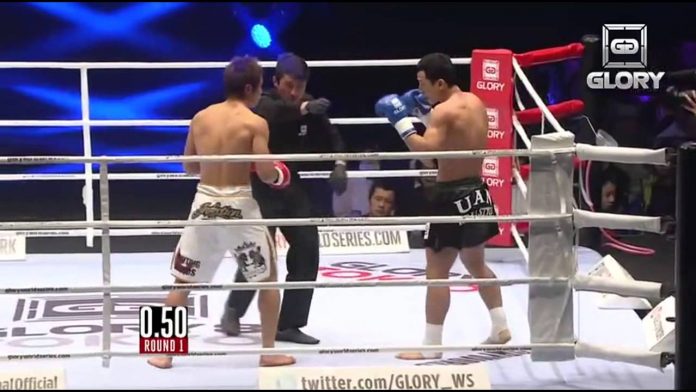 In the main event, Yuta Kubo continued his reign of terror, stopping Charles Francois with a body shot at 2:18 into the 2nd round to claim the ISKA Light Welterweight title. Kubo used his offensive skill-set to keep Francois off rhythm and scored a down in the first round with a head kick. In the second, Kubo worked Francois’ body en route to a body shot KO. Kubo (32-4-1, 15 KO) is now on a 9-fight win streak, going an incredible 13-1 (5 KO) since the beginning of 2010. An interesting note is that his last four wins have come over European competition. With FIKA showing signs of life with their recently announced Koshien Tournament, expect their focus for tournament selection to still be Japan-centric at -63kg and Kubo is the #1 fighter in Japan at the weight. Not to mention the lighter weight tournaments have usually taken place earlier in the year. Francois (33-10-1, 25 KO) was 2-6 in his last 8 coming into this fight, so it seems like a bit of a squash match, something Kubo has had trouble avoiding lately.

In the co-main event, Yoshihiro Sato has taken a positive step in reclaiming some consistency, taking a unanimous decision over ISKA Light Middleweight champion Fadi Merza on scores of 50-45 (x3) to claim the ISKA World Light Middleweight title. Sato (49-17-0, 20 KO) made it to the finals of the most recent K-1 MAX World Tournament in 2010, defeating Yuya Yamamoto, Michal Glogowski and Gago Drago, but losing to kingpin Giorgio Petrosyan in the finals. After that fight, Sato won a questionable split decision over Shemsi Beqiri in Krush, then lost a questionable decision to Armen Petrosyan, lost to Andy Souwer in Shootboxing and was involved in yet another questionable decision with his win over Albert Kraus in K-1, then lost his most recent fight to Alex Tobiasson Harris at Rumble of the Kings 2011, though that fight was at 75kg. Not to say those questionable fights weren’t very close, but they could have easily gone the other way. Merza (118-18-3, 43 KO) was coming off of a loss to Cedric Muller in The Challenger Muay Thai.

In a 70kg bout, K-1 veteran Xu Yan scored a bit of an upset, knocking out 2009 K-1 MAX World Tournament semifinalist Yuya Yamamoto at 1:39 into the 1st round. Yan appeared to get off to a good start, landing against the defensively flawed Yamamoto. Then in the second round Yan took over, scoring three knockdowns and earning him the TKO victory. Yan (30-13-0, 15 KO) had lost 4 straight fights coming into this fight with back to back losses to Abdallah Mabel in Fight Code. He was previously best known for his KO of Yuichiro “Jienotsu” Nagashima in K-1 in 2009. Yamamoto (33-22-1, 11 KO) hit his career peak in 2009, defeating Chi Bin Lim and Gago Drago to make it to the semifinals of the 2009 K-1 MAX World Tournament where he lost to Giorgio Petrosyan by KO. Since, he has struggled immensely, going 6-5 (2 KO), being upset by Hinata and Shintaro Matsukura and most recently being KO’d by Yuji Nashiro in the finals of the 2011 K-1 MAX Japan Tournament after taking a questionable decision win over Kenta in the semifinals.

In a 61kg fight, K-1 veteran Kizaemon Saiga picked up a majority decision win over Katsuya Goto on scores of 30-30, 30-29 and 30-27. Saiga (8-4-1, 1 KO) has proved himself to be a tough out in the 63kg division, but he is not quite an elite fighter. After an upset over Naoki Ishikawa in K-1, Saiga was KO’d in the semifinals by eventual champion Tetsuya Yamato, then upset by Korean prospect Sun-Hyun Lee. He won a fight in Krush, then lost in the opening round of the Krush 63kg Tournament to eventual champion Ryuji Kajiwara, then lost in the opening round of the 2011 K-1 -63kg Japan Tournament to eventual champion Yuta Kubo. In short, if you defeat Saiga in a tournament, you win the tournament, though the two times HIROYA defeated Saiga in the Koshien Tournament were the two years he lost. He is now on a 3 fight win streak. Goto (8-6-1, 3 KO) most recently defeated Takeshi Watanabe at Krush.11.