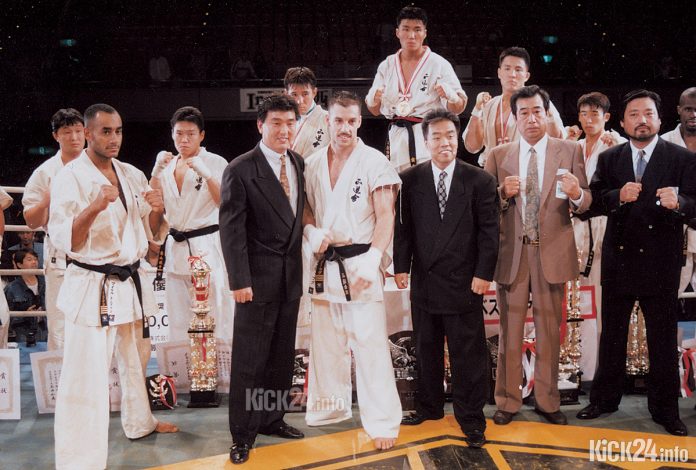 Kazuyoshi Ishii officially announced FIKA today, and has promised it will be a new day for K-1 worldwide. FIKA is the Federation International K-1 Association, and will apparently be the new governing body for K-1. There will be a K-1 World Grand Prix in 2012, but to fully grasp what Ishii and his new partners have planned, think big.

FIKA is to be headquartered in Hong Kong and they are going to appeal big time to Chinese audiences by having some of their biggest shows take place in China. There will still be a “World Stage” event in Japan, but it doesn’t appear to be the Finals. They are looking to hold events around the world to bring a ‘World Cup’ feeling and will try to be the FIFA of Kickboxing. FIKA has also brought on famous Chinese folk singer Song Zuying to sing the official FIKA theme song, which was apparently the big headline grabber in China in regards to this announcement, on top of the list of famous people at the event. The theme song will apparently be recorded in English as well, which Zuying was quoted saying it would help FIKA have a global appeal.

Seven Star Entertainment Fund, a branch of Sun Redrock Investment Group will serve as a partner in FIKA, owning about 60%, with the rest of the management team comprising the remaining 40%. Who is actually a part of this team outside of Ishii is not clear, but with the rumors of Bas Boon looking to invest in K-1 and this looking to be the future of K-1 and Bas Boon was on stage for the announcement with Semmy Schilt, it would be hard not to make connections. FIKA is looking to make for a much stronger push into the United States and China for K-1 and be less Japan-centric.

As of press time there is no firm details on a schedule or possible television deals. The only schedule is a rough one on the FIKA website’s press release, which states April for the world qualifiers, May/June for the 32 stage, Sept/Oct for the 16 stage and Oct to December for the Final 8. This will be in three weight classes; 63kg, 70kg and 100kg.