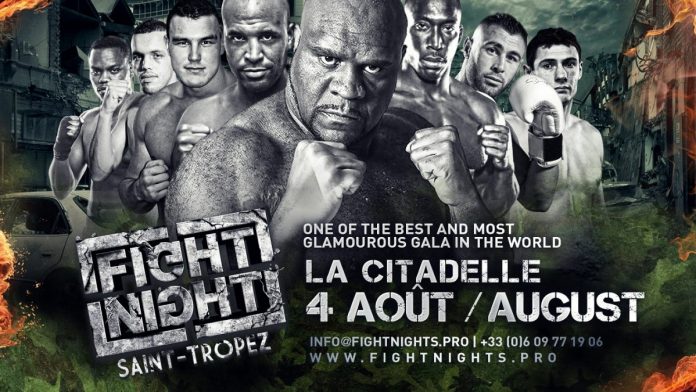 Saint-Tropez Fight Night have announced their sophomore event will take place on August 4th 2014 from the unique and beautiful venue of La Citadelle in Saint-Tropez, France. The card will be headlined by a heavyweight double-header featuring French kickboxing legend Jerome Le Banner and his fellow countryman Freddy Kemayo, as they square of against Daniel Sam and Peter Aerts respectively.

Many fans will remember the infamous debut of Saint-Tropez Fight Night last year, whereby Jerome Le Banner defended his WKN World Title and was subsequently presented the belt by Hollywood star Sylvester Stallone. Le Banner looks to pick up his second victory of 2014, as he stopped Luican Danilencu with body-shots back in May. Englishman Daniel Sam will look to get back in the winners circle after getting KO’d by Moroccan prospect Ismael Lazaar last weekend in London. To make it even worse for Sam, he’d lost his last three bouts previously as well, with all three losses coming in in dominant fashion.

Fresh of the announcement that he will meet long-time rival Ernesto Hoost in Japan later this year, ‘The Dutch Lumberjack’ Peter Aerts will also square off against Frenchman Freddy Kemayo. Kemayo enters the bout on a six-fight win streak, having not loss since November 2012.

Saint-Tropez Fight has also announced that all bouts will be contested under Muay Thai rules and at 95kgs. There are more bouts expected to be announced at a later date.