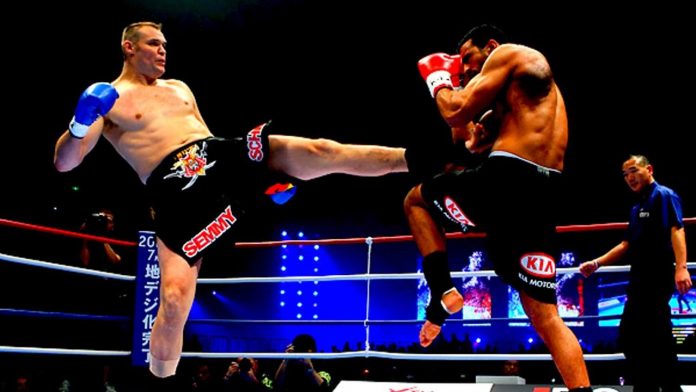 A picture says a thousand words and Semmy Schilt was able to hold onto the top spot in Heavyweight Kickboxing as he wins his fifth major Kickboxing tournament with a win over tough challenger Daniel Ghita. Daniel Ghita and Semmy Schilt were the favorites heading into the event and it was no surprise when both men found themselves standing toe-to-toe in the finals. This was a rematch from 2009 where Semmy Schilt was able to dominate Ghita to take a decision victory in the K-1 WGP Final 16 and since then Semmy has aged and Daniel Ghita has evolved into a more complete fighter.

Schilt’s night included knocking out Brice Guidon, taking Rico Verhoeven to a decision and going the distance with Gokhan Saki while Daniel Ghita never quite looked like himself as he struggled with Jhonata Diniz and edged out Mourad Bouzidi who fell victim to a freak accident. Things turned around for Ghita when he knocked out Jamal Ben Saddik with one kick to the gut, leading into the biggest fight in Heavyweight Kickboxing today.

The Finals started off with both men feeling each other out, Semmy fighting like Semmy and Ghita getting off a few good shots before a huge head kick connected from Schilt and Ghita went down like a sack of bricks. Ghita looked stunned but pulled himself up and looked composed before referee Joop Ubeda decided to call the fight in a controversial decision even though Ghita was fine and we usually see Finals go until only one man can stand.

Schilt walks away with the $400,000 USD grand prize and Daniel Ghita gets $100,000 as a consolation. No doubt that Schilt had a good night and deserves his due, but there are going to be a lot of questions surrounding Joop Ubeda’s decision to call the fight that early.