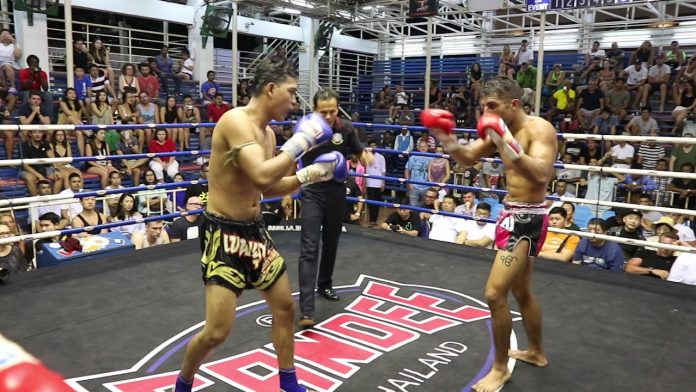 Just like with kickboxing, there are a ton of marquee Muay Thai fights to watch this month. I’ll highlight all the fights that you should know about and keep an eye on.

Damien’s title isn’t on the line here but he faces Thongchai, who until recently has fought at 135 and below. Thongchai’s last fight was at 137 for him and that’s where this fight is. Despite Thongchai coming up in weight a bit, it shouldn’t affect the fight too much as 135 and below is just much better talent-wise than above 135.

This fight should be an all out clinch battle, just like their previous fight. Expect grueling knee exchanges and back and forth changes in momentum as both fighters tussle for position in the clinch.

Here’s another fight in the series between Sagetdao and Singdam. Singdam’s kicking game at range vs. Sagetdao’s relentless clinching.

Really interesting fight here. Mondam got an impressive win over Superlek Wor Sungprapai in his last outing on February 15. In Chokprecha’s last fight, he lost to Pongrit Chor Chunrgamon in somewhat of a lacklustre performance. Getting back on track against Mondam certainly won’t be an easy task.

Saenchai is back fighting around the world again, this time in Ireland against another much bigger opponent, Houcine Bennoui. This will be Bennoui’s toughest test to date. For Saenchai, it’s just another fight.

Hiroki Ishii is the Rajadamnern champion at 140lbs and is fighting another undersized Thai opponent, and one who doesn’t have a stellar record as of late. The question is, will he get another stoppage here?

This will be Pokaew’s first fight internationally, and he faces the bigger Yetkin Ozkul. While Ozkul fights all the way up to 63kg, he isn’t that big himself. Ozkul also struggles with clinchers, and Pokaew is one of the best clinchers in the game so I don’t think the size advantage will play too big of a role here.

This is a really interesting match-up. Petpanomrung has been fighting at 126 and below lately while Saeksan moved up to 130 and below. Saeksan is an ultra aggressive, high octane, all out fighter while Petpanomrung is a highly dynamic and skilled young technician. Whatever the weight is makes it even more intriguing.

This is the final of the Isuzu 142lb tournament.

This is a fight between two of the best light heavyweight fighters in Muay Thai and has been anticipated for a very long time. The fight had fallen through three times previously but it’s finally set in stone.

Sanny Dahlbeck is back in action, this time under full Muay Thai rules. At just 21 years old, he has what seems like a very bright career ahead of him. He’s stayed busy with some amateur fights and this will be his first pro fight since his run in the GLORY 3 Rome 70kg tournament in November.