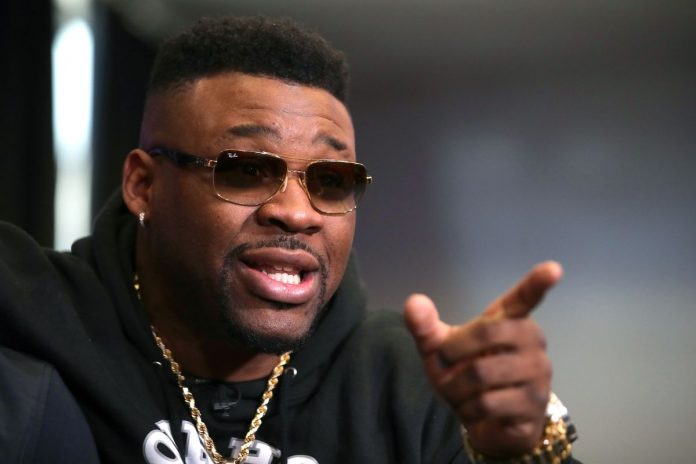 K-1 returns on September 8th with the K-1 U.S. Grand Prix in Los Angeles, with an American line up of both old stars and new, K-1 looks to make its biggest impact yet on the United States with its own unique brand of fighting. LiverKick has the pleasure of bringing you, the reader, insight into the mind of one of the newer fighters to the K-1 ring, Jarrell Miller. Over the next four weeks we will be talking with Jarrell and bringing you his thoughts and preparations leading up to his fight against another newcomer to K-1, Jack May. This is week 3.

This week as a big week for K-1, as K-1 and Spike TV announced a multi-platform deal which means that the September 8th show will be streamed live on Spike TV’s website, Spike.com. Spike.com has been airing Bellator MMA events on there and see a healthy amount of traffic, which for this event only means that more eyes will be on it. We asked Jarrell if this changes anything for him.

“Nah, I mean, I’m motivated regardless. Even if this fight was shown in, you know, a hole in the wall I’d be motivated,” he explains. “I’m even more excited knowing that more eyes are on me now. At the end of the day, I know what I gotta do regardless. You know, I got my life on the line here.”

But that wasn’t the only thing that was new for this week for Jarrell, as he has ramped up his training considerably. Originally slated to work with Phil Nurse, they’ve switched up his camp a bit and brought in a new striking coach for him and the focus has been on his kicks, as his hands don’t need the same type of focus.

“Lots of kicking drills this week,” Jarrell confirms. “This week has been conditioning and a lottttt of kicking. I mean that, a lot of kicking. That has been my focus, because I’m always kicking, but not like this. I’m training way too fucking hard. You gotta recognize throwing kicks again, man. The stuff we are doing now it feels like I’m in a real fight while I’m training, it’s an entirely different animal. I mean, I’m working out two times a day.”

Indeed he is, as after last week’s interview a lot of eyes popped out when they saw that Jarrell, a 240lbs fighter, was running six minute miles. What is funny is, some of his training partners went out of their way to confirm that even though Jarrell is the biggest guy at the gym, he’s probably the fastest guy as well. When it comes to his opponent, Jack May, though, he has some choice words for him.

“I bet he hasn’t even sparred with anybody like me. I bet he’s never been hit with a body kick like this before,” Jarrell laughs. “I mean, fuck this, I’m gonna go in there and knock his head off. I don’t care if I gotta kill him to make a statement, knock his ass out and leave him unconscious on the mat for three minutes. I’m going to break some faces in K-1.

“Look, I don’t know this guy, I don’t know his story of where he came from, but I know it wasn’t as hard as where I’m from, as what I’ve had to overcome. This shit is real, this life has been tough and I’m tougher for it,” he reflects. “I already know how he’s gonna fight, I know he’s gonna do this in one of two ways. He’s either gonna come out fast and strong or he’s gonna come out and want to feel me out, do this pitter-patter shit. I don’t really care what he does, I’m going to take his head off in the first round, I guarantee it.”

As for if Jarrell is looking beyond this fight, it is safe to say that he is. “I was ready for him before I even signed the contract,” he added. “I’m ready all the way to December when I’m going to take the finals. I’m a bit disappointed because, there is like, no real crazy Kickboxing guy for me to beat in this whole tournament thing. I want Daniel Ghita, I want to knock his head off, but who knows where he’s at. You know, there is no Jerome Le Banner, there is no Alistair Overeem — I’d knock his head off, too, you know — there aren’t these high level elite guys in this, and I know that I’m a really good fighter, but I need that big win. I gotta beat the boss, you know? Mirko Cro Cop, you know, he’s cool, but he’s older, I’m gonna fuck him up.”