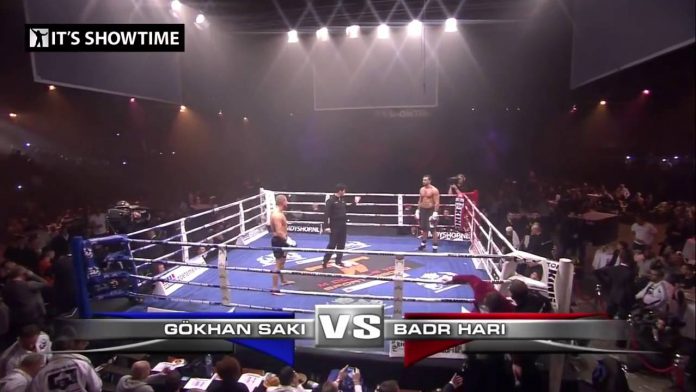 This is the fight that everyone has been anxiously awaiting. Badr Hari fought a grand total of once last year, and it wasn’t much of a fight. Since then he has decided to look to the world of Heavyweight Boxing and this could be his last fight in Kickboxing. Saki has had similar rumors surrounding him, but he wants to Kickbox, it is his passion.

The atmosphere is absolutely electric as Saki comes out to an energetic entrance, getting everyone on their feet, and then Badr Hari comes out through the crowd again and the crowd are all on their feet, on their chairs, rushing the guard rail. Another event where they have to tell fans to go back to their seats so they can start the fight.

Saki looks to come in quick with a low kick while Hari starting off slow with Saki moving in and out. Saki actually lands an unintentional takedown on Hari and both men are just measuring each other now. Badr is looking for a home run with his hands while Saki is looking to wait it out and pick his shots. Saki pushes in and Hari lands a knee, then a HUGE uppercut lands from Hari! Saki is down! Saki gets up! Saki goes for a Leko Buster but misses. Hari with a right hand! Saki goes down! Saki looking to slow the fight down but a right uppercut form Badr puts Saki down for a third and final time!