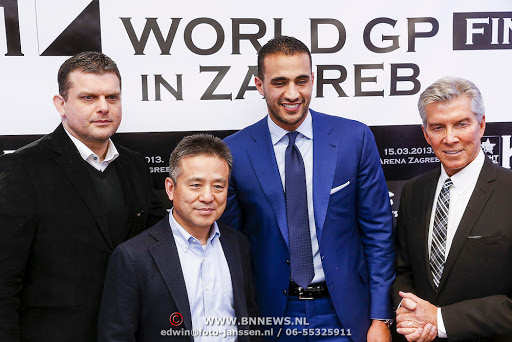 There have been a lot of questions from fans over the past few weeks as for what will be in store for K-1 after the tremendous September 14th event in Mallorca, Spain. To the public, things have been quiet on the K-1 Global front, but there has been a lot of movement behind the scenes, with plans being laid out for the next year. I spoke with K-1 Global’s Director of Events & Fighter Acquisition Ned Kuruc about the future of K-1 and it seems like the gears are fully in motion in pushing K-1 into the future.

The first topic was on making the message extremely clear to fans; K-1 is going to change how their shows are run, shifting the emphasis from tournaments to crowning champions across weight divisions and having them defend these belts. “We’re gonna open up our weight divisions, we want to have a clear cut champion in each division,” he stated. “He’ll go on to defend that championship and we’ll get to see who is really the best in each weight class. We’ll have a top ten ranking in every division and fighters will move up the ranks and try to fight the champion.

Kuruc also cites that the marketplace has completely changed over the past ten years, which was a factor in this decision. “It’s a completely different marketplace than it was when K-1 first started and companies need to adjust,” he explains. “We feel that this is the right adjustment. The fans want to know who the 63kg champion is, who the 70kg champion is and by doing it this way fans will be able to follow their favorite athlete’s career. The current format crowns a new champion every year, but they are just the champion of this year, then for the next tournament they have to start all over again.

“It’s also a matter of making the fights that fans want to see. Take for example Artur Kyshenko, he had competed in K-1 for how many years and somehow never fought against Buakaw? They would fight on the same shows but they never fought each other. People want to see that fight, but in a tournament format you can’t deliver this fight outside of a stroke of fight. With us having the ability to control who fights who, K-1’ believes that this will be able to give fans the best possible fights that they want to see.”

As for when to expect these changes to come into play, Kuruc says that it will be the near future, by the beginning of the year. “It’ll start in early 2014, probably as soon as January. We’ll shortly be coming out with the first half of the 2014 schedule. I’m currently developing shows in quite a number of countries. K-1 will still be a global organization, with shows on different continents and different countries.

“We are really looking for young and exciting fighters right now. I’m spending a lot of time right now watching a lot of footage. Our personnel will be attending a lot of amateur championships around the world. It’s not that we are rebuilding it is just that we feel like there is a wealth of great fighters from the ages of 18 – 23 and we want to be the ones who expose them to the world. They have new styles that they fight in and it’s really exciting to think about creating new stars within K-1.”

Of course, the question still looms about what is going on with the 2013 K-1 World MAX Championships, as the Final 16 was held in September and fans were promised resolution on this. It turns out, they will get their resolution, it will just take on a slightly different form.

“We’re not gonna do the Final 8 fights in one night, instead we’re gonna build up to a Final,” he said, showing the difference between previous years. “On the first two shows we’ll have four of the winners, on another show we’ll have the other two winners. So the first two rounds of the Final 8 will be spread out over those shows, then Finalists will compete on a separate show for the Championship. The winner of that will not only be the year’s MAX Champion, but our 70kg Champion as well.

“This gives fighters a chance to rest, heal up and train for each opponent,” he added. “These guys are top athletes and it only seems fair to give them a real chance to prepare for their opponents. So 70kg will be the first division that we open up, followed by the top ten rankings after we find our Champion. The next divisions that we’ll open up will be 63kg and 85kg, while I’m also looking for a few good, exciting Heavyweights, as Heavyweight is on the agenda as well.

“We plan on running these events in January and February, which means that we’ll be crowning our 70kg Champion by the end of February or early March.”

These aren’t the only big plans for K-1, as they plan on running 12 big events throughout 2014, but these are some of the big changes that are happening. K-1 Global seems confident in this new format and that it will not only be best for the fans, but also benefit the careers and longevity of the fighters involved as well.