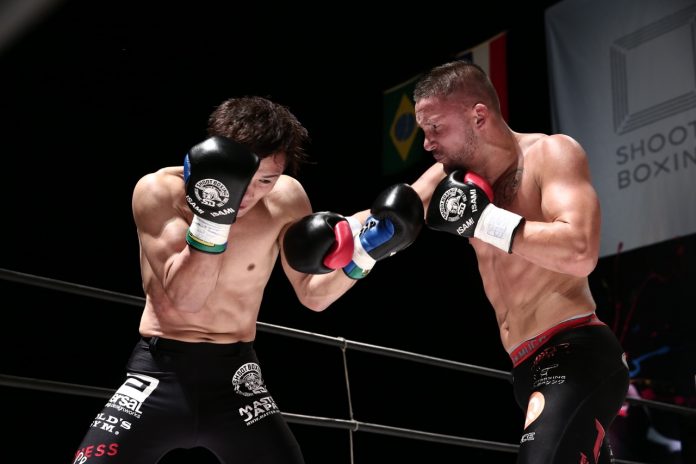 With the S-Cup just 2 weeks away, Shootboxing has begun announcing fights for the event, as well as tournament reserves. However, there has also been some questions regarding the tournament field.

The other day, two interesting pieces of news had surfaced. First, Albert Kraus, who is suffering from the flu, was replaced in his reserve fight by Warren Stevelmans, who is set to participate at the S-Cup. Shortly before that, Yokkao had announced via Twitter and Facebook that Kem Sitsongpeenong would be fighting Andy Souwer at the S-Cup, but that news has since disappeared from Yokkao’s social media outlets. Add in that Henri van Opstal still isn’t officially listed as a participant and the S-Cup field becomes quite confusing. Check back to LiverKick in the coming weeks as we try to clear up some of the confusion.

Moving on to announced fights, perhaps the biggest super fight announced so far is RISE 60kg champ and LiverKick #10 ranked Lightweight Kosuke Komiyama taking on Shootboxing Featherweight champion Naguranchun Masa M16. Komiyama had his first fight in Shootboxing in September, taking a unanimous decision against Shootboxing Super Featherweight champion Akifumi Utagawa and looks to push his win streak to 9 with a win here. Naguranchun has a 9-fight win streak of his own that he is looking to preserve, going undefeated since a pair of losses to Pajonsuk Por Pramuk and Mamoru Yamaguchi in 2009, avenging the loss against Yamaguchi back in April.

Finally, Shootboxing has announced 3 reserve fighters for the tournament field: Satoru Suzuki, Hinata and Akihiro Gono. Each man was unsuccessful in earning a spot in this year’s S-Cup with losses in S-Cup Qualifiers at Shootboxing act.4 in September. I assume there will be a 4th reserve fighter announced, meaning 2 reserve fights.