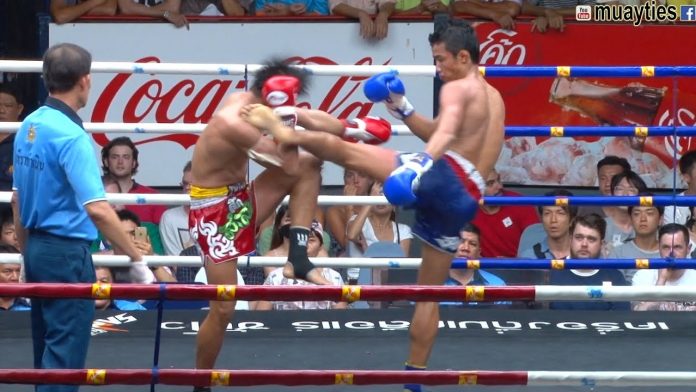 With Saenchai Sinbimuaythai now concentrating on fighting over sea’s a lot more, and Nong-O in a bit of a slump, a clear #1 has emerged in Thailand. That man would be Kongsak Sitboonmee, the latest winner of the Thailand’s Sportswriters fighter of the year, the most prestigious award that can be given to a fighter. He went a perfect 8-0 from March of 2010 – March of 2011. After going 7-0 he was paired against Pakon Sakyotin in a fight at 127 pounds that would determine the winner of the award. Pakon who is remembered for his ultra violent fight with Pornsaneh Sitmonchai from last year was also riding a great record coming into the fight, and a win over Kongsak was the only thing holding him back from grasping the award he has come close to winning before.

You can see the fight is competitive, even though it gets a bit ugly. It seems like there was a little bit of tension in both guys, and neither are throwing with there usual superb technique, though its still very good. I think a lot of that can be do to the importance of the fight. By R4 it appears Kongsak has got the fight where he wants it. Pakon who is a strong clinch fighter has struggles tying the bigger Kongsak up, but does get in his share of strikes at times. The left leg of Kongsak and his ability to not let Pakon get comfortable were the determining factors. While not super exciting, Kongsak is a very smart fighter, and throws a heavy kick. This style of fighting will allow the 21 year old to be around for many more years.

Next month he looks to start off another run at fighter of the year when he faces one of Thailand’s best, Sam-A Thor Ratonakiat.

For the sake of Muay Thai I hope he and Saenchai who will also be competing next month on the same card against Petchboonchu F.A Group…. again, (sigh) can agree on a suitable catch weight. Kongsak vs. Saenchai is the biggest, and best fight that can be made in all of Muay Thai. Lets cross our fingers and hope it happens.