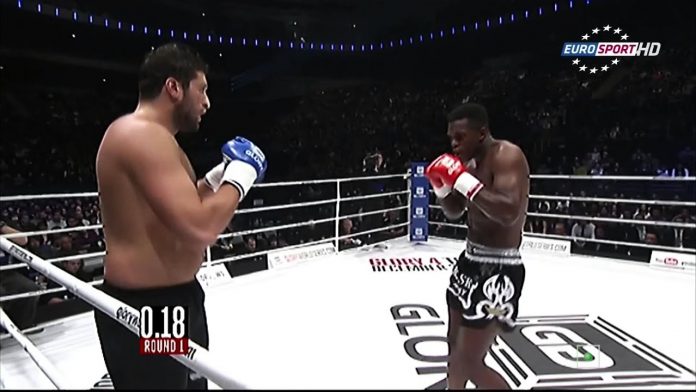 Few things are more exciting than a fighter that throws caution to the wind. One that’s willing to lay it all on the line to entertain the fans and make sure everyone in attendance sees a good show. As fight fans, we cheer most intensely for those that have one goal in mind: to show no quarter and destroy or be destroyed. It’s a recipe for success in gaining fans and there are those that have parlayed that style into a legendary career. But what about those that don’t walk that thin line between success and failure? The fighters that place winning above entertainment.

With 40 knockout wins to his credit, your first thought would be that Remy Bonjasky is not a boring fighter. Training with the legendary Ivan Hippolyte at Vos Gym has given The Flying Gentleman the tools to record some of the most memorable knockout wins in K-1 history. His flying headkick KO of Vernon White at the 2003 Las Vegas Grand Prix being just one of them. But the overall consensus among fans is that Remy is a safe fighter that will cover up with a double forearm guard, not engage, strike when he has to, and ride out a decision win. A very calculated strategy but not one that will win him legions of fans. By and large, fans place higher emphasis on fireworks than they do a sound path to victory. While some astute students of the fight game can enjoy the mechanics of a style like Remy’s, all fans can enjoy two fighters standing in the center of the ring and throwing punches and kicks till one falls. To borrow a phrase from the great Jim Ross, people love a slobberknocker.

It’s hard to argue with his record, though. The Surinamese native has achieved a huge amount of success in the K-1 ring by not deviating from his strategy. Fighters often grow visibly tired of Remy’s refusal to engage in a slug-fest as evidenced by them throwing up their arms in disgust while openly taunting Bonjasky. Ever vigilant in his approach, he has used this method to win three K-1 World Grand Prix titles. Back to back in 2003 and 2004, then again in 2008. Proving the validity of his style, Remy won two of those titles by decision and one by default when Badr Hari was disqualified after stomping Remy in the head while he was down. By sticking to his guns and never letting fan or fighter approval sway him from concentrating on his goal, Remy has attained legendary status.

Which begs the question, is it better to be successful or well liked? Going against the grain means often walking alone. Such legendary fighters as Peter Aerts and Ernesto Hoost have won multiple WGP titles and acquired a large fan base at the same time. Why is that? It’s hard to nail down one reason but let’s look at the roads to victory for Peter Aerts and Ernesto Hoost.

Peter Aerts defeated Masaaki Satake by unanimous decision to win his first K-1 WGP title in ’94. He would go on to win the next two by defeating Jerome Le Banner with a body shot in ’95 and knocking out Andy Hug with his trademark high kick in ’98.

Ernesto Hoost defeated Andy Hug by decision to win his first WGP title in ’97. He then used a body shot to defeat Mirko ‘Cro Cop’ Filipovic in ’99, a decision victory over Ray Sefo in ’00, and a kick to shatter Jerome Le Banner’s left arm in ’02.

Both Peter and Ernesto recorded decision wins over their opponents but they also had decisive KO wins that left nothing to doubt. Something lacking in Remy’s World Grand Prix run. What athletes do and how they do it, on the biggest stage, is what often defines their career.

This scenario isn’t limited to the kickboxing world as mixed martial arts fighters often fall under the same scrutiny. Georges St. Pierre, John Fitch and Rashad Evans are all fighters that have achieved success and are often criticized for utilizing a system that is based around wrestling and not striking. Again, a style that is technically sound but not exciting to the casual fan.

One fighter that certainly bucks that trend is Wanderlei ‘The Axe Murderer’ Silva. His willingness to put entertaining the fans above all else has earned him arguably the largest fan base in combat sports. The Brazil native is known worlwide for his brawling style that often finds him standing toe-to-toe with his opponent and throwing punches until he knocks out his opponent or he is knocked out. Living by the sword and dying by the sword is nothing new for Wanderlei as he has knocked out opponents to win multiple titles and also fell victim to highlight reel KO’s. He often speaks of his desire to entertain the fans that show up looking for a good fight and how he’ll do anything to give it to them. The fans respect that a great deal and will always tune in to see him do battle.

In the end, Remy is a three time World Grand Prix champion and will go down as one of the best to ever lace up the gloves. That’s undeniable. Could he have developed a larger group of fans by being a fighter that was more exciting and avoided winning by decision if possible? I believe so but that would cause him to fight out of his comfort zone and who knows how successful that would have been. He might not have one title to his record today if he acquiesced to what those around him wanted. Remy has done what few fighters have had the good fortune to and when the sun sets on his career, I believe that’s what matters to him most.